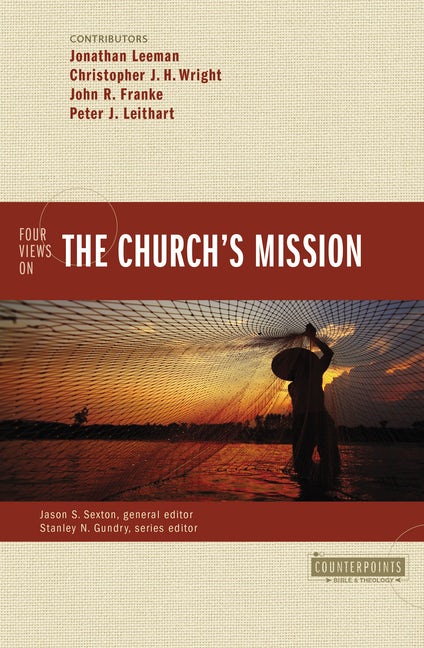 This review was originally published in Missiology: An International Review, April 2019.

This book is part of the Zondervan Counterpoint Series (31 vols.). Four writers present their view of the church’s mission with response/critique from the others. An earlier book, The Mission of the Church: Five Views in Conversation (2016), treated the topic from broader parameters of Protestant, Catholic, and Orthodox traditions. The present book represents a broad evangelical spectrum which includes Leeman’s Soteriological Mission, Wright’s Participatory Mission, Franke’s Contextual Mission, and Leithart’s Sacramental Mission.

Jason Sexton’s introduction reminds us of the complexity in defining “church” with “little critical reflection on what the word means” (7), and that “somewhere along the way mission became fuzzy” (8). He recognizes that these positions are “personality-based, reflected by the people and the institutions these thinkers have been shaped by, as well as by their experience of church . . . in no way detached from their ecclesiologies” (15). This volume extends the debate following recent discussions on the mission of the church, notably DeYoung’s and Gilbert’s What is the Mission of the Church? (2011).

The authors proceed from distinctive starting points, embrace diverse commitments, and arrive at different conclusions. They wrestle with theological, hermeneutic, and epistemological questions and with degrees of continuity and discontinuity between the Testaments. Leeman, while presenting a broad and narrow view of the mission, prioritizes the narrow view “to make disciples by declaring or mediating God’s judgments” (29) in light of the truth that “the threat of God’s eternal wrath is the most urgent of all” (30). Wright delineates three domains of an expanded mission: cultivating the church, engaging society, and caring for creation (81). Franke asserts that mission “must be situated in the context of the doctrine of the Trinity rather than ecclesiology or soteriology” (112). A diminished soteriological aspect (per Leeman) is unsurprising given Franke’s commitment to “conditional immortality or annihilationism” (56). Leithart’s view “attempts to bring contemporary evangelical missiology more fully into conformity with biblical standards by emphasizing the role of baptism and the Supper in missions” (156). His quip that Franke’s proposal “feels ethereal” (147) might be applied more broadly in how these views take shape in the real world of ministry.

If nothing else, the four views demonstrate that none stands unassailable and consensus is unattainable. This book is not a mind-changer for those already convinced of their perspective. Seminary students, church leaders and informed laypeople, however, will appreciate the contribution of other views if only to examine and strengthen their own.