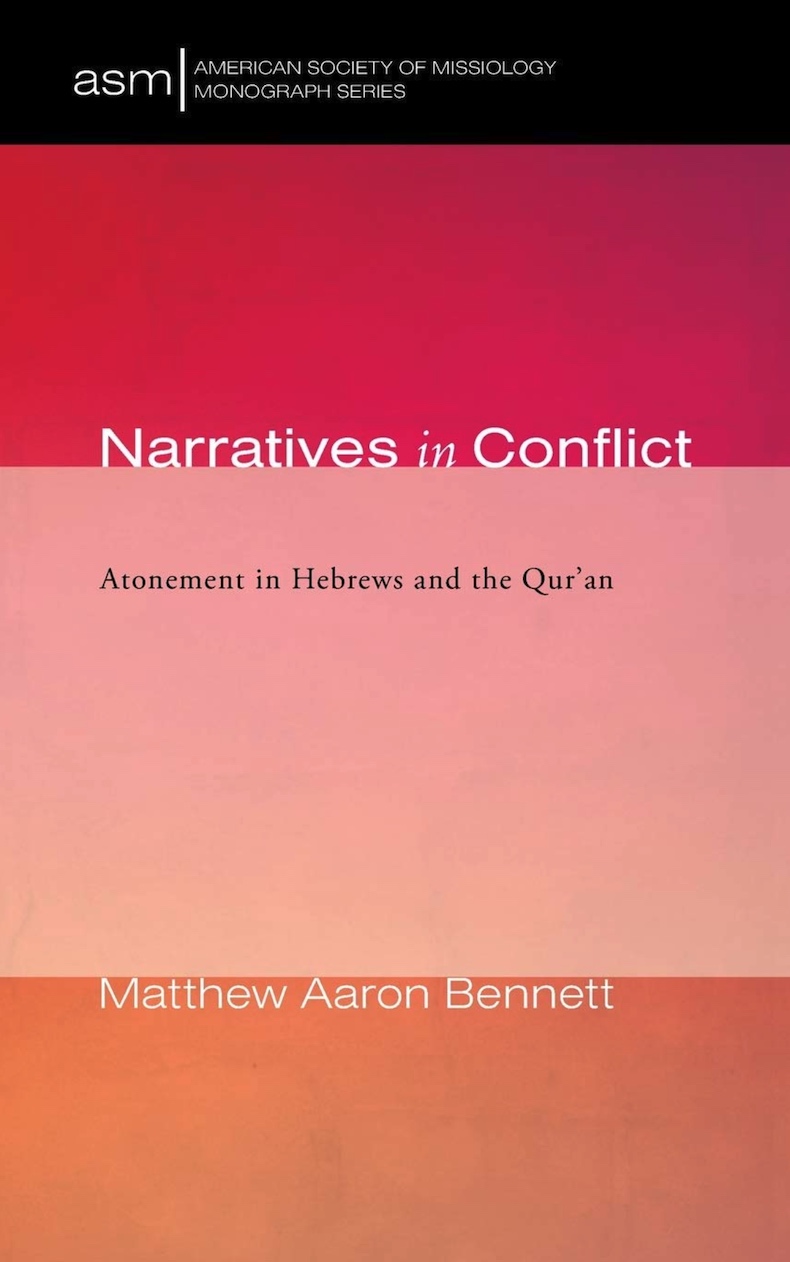 Narratives in Conflict: Atonement in Hebrews and the Qur’an. American Society of Missiology Monograph Series. Pickwick Publications, 2019. 260 pages. US$31.00.

This review was originally published in Evangelical Missions Quarterly, January, 2021.

Islam and Christianity both claim continuity with the Abrahamic tradition. Their respective founders are presented as the final revelation of God in the succession of the prophets. This book investigates and focuses on one major teaching central to both religions: the atonement in the Bible and the Qur’an. Both religious texts contain language and concepts related to atonement, but the religions must account for the absence of atoning animal sacrifices. Matthew Bennett postulates “an underlying disunity in the biblical and qur’anic ideas of atonement” (ix) and seeks to explain the conflicts on lexical, ritual, narrative, and worldview grounds (7–8).

In his introductory chapter, Bennett assesses contextual ministry and overarching biblical narrative models. He finds that none of them offers “a satisfactory argument for where one might begin in Scripture to explain a biblical view of atonement to a Muslim audience” (36). He argues that “the book of Hebrews, and particularly the attention given to the manner in which the Christ event fulfills the Day of Atonement ritual, can be used to expose divergent worldviews between the Bible and Qur’an” (41). Bennett adopts N. T Wright’s six questions for worldview analysis – Who are we? Where Are We? What is Wrong? What is the Solution? What Time is It? and Why? (67) – and answers them through the lens of Yom Kippur in Israel’s history (67–68). He turns to the book of Hebrews which “advances Israel’s story” (81) in its portrayal of Christ as the fulfillment of Yom Kippur.

He returns to the six worldview questions in chapter three to demonstrate that “Christ’s atonement fulfills and exceeds the Aaronic atonement” (105), and that Christ’s sacrifice provides “the image of which Yom Kippur was the shadow” (110).

In chapter four, Bennett turns to the Qur’an for its answer to the absence of sacrificial atonement. He examines the Qur’an’s claim to continuity (112), approaches to understanding the Qur’an, (115), and the atonement language in the Qur’an (121). He emphasizes that the Christian missiologist must “understand that the distinction between the Bible and the Qur’an or Christianity and Islam is not merely one of competing rituals, but of competing stories that stand behind the rituals” (146).

Chapter five asks the six worldview questions of Islam with special attention to the story of Abraham’s sacrifice and the ritual of ‘id al-Adha. Bennett explores Islam’s answer for humanity’s problem (ignorance), and its solution (guidance) which shows “the believer how to remove sin and impurity” (160). Islam’s solution is contrasted with Christ’s sacrifice as “the eternal atonement that the annual Yom Kippur celebration pointed toward but could not provide” (167). Bennett’s book, meticulously researched for his PhD dissertation, provides a significant apologetic resource for those engaged in Muslim ministry and a way forward for investigation and comparison with other teachings of the two religions. To benefit from this book, one must have a solid graduate-level theological foundation and acquaintance with Islam.

Strong, Cynthia A. and Meg Page, eds. A Worldview Approach to Ministry Among Muslim Women. William Carey Library, 2013. 51 B